PHOENIX Pharmahandel GmbH & Co KG from Mannheim, Germany is the leading pharmaceutical distributor in Germany and one of the leading pharmaceutical distributors in Europe. As such, the company offers a wide variety of services to its customers, the pharmacies, through a Pimcore based web portal. One of these services is the possibility for pharmacies to order advertising flyers and posters for their shops.

PHOENIX needed an easy solution to offer their customers the possibility to order advertising flyers and posters. The old system was based on XML and the templates were hard to edit without special knowledge. So the main goal was to provide a visual backend editor for the PHOENIX employees to customize the templates in an easier way. The new templates should also be based on HTML/CSS to get more design possibilities and to enhance the overall performance of the system.

PHOENIX provided a solution for their customers to configure and order custom advertising flyers and posters. These products were highly customizable. The customers were able to change the products which they wanted to be contained in the flyers and posters and could also change background images and colors.

The PHOENIX employees often had to manually correct errors in the customized flyers before they could be printed. Also, the templates for the flyers and posters were based on XML and offered only limited design capabilities. The poor performance of the software which was further slowed down the process. 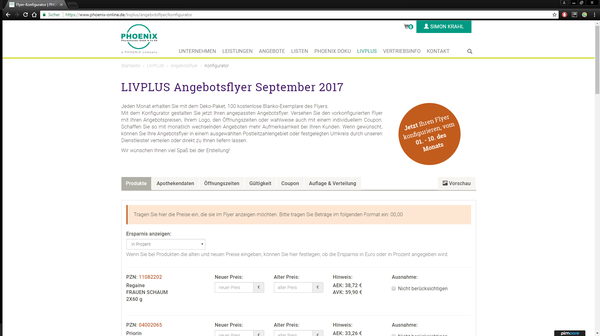 The new template engine is based on HTML/CSS and offers more possibilities for great designs. The printable PDF files are rendered by PDFreactor, a powerful HTML-to-PDF-Renderer, which offers great performance and high-quality PDF output. To edit the basic templates, Quellwerke developed a new visual tool with drag and drop functions to customize the positions and dimensions of various template-elements.

On the other hand, customization possibilities for customers were greatly reduced to simplify the configuration process. The products on the flyers and posters are pre-defined by PHOENIX employees and the customers can only change the prices for the products and can provide a voucher to be printed on the flyer. 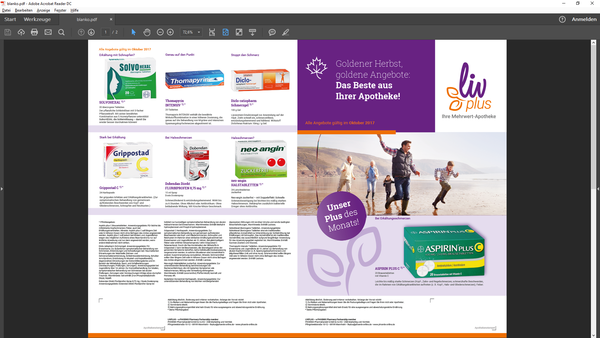 With the new template engine and the visual tool for editing templates, the employees are now able to edit all templates on their own in a visual interface without having to edit complicated text files.

The customers lost some possibilities to customize their flyers and posters, but can also produce fewer errors, which greatly reduces the effort of PHOENIX employees for correcting these errors. Also, the customers are happy about the easy-to-use simple interface and usability.

As the main website of PHOENIX was based on Pimcore, 'Quellwerke GmbH' decided to develop a new plugin for the template editor, which integrates completely into the Pimcore backend. All data is stored in a separate database and is accessed over a special REST-API. To provide more flexibility in terms of design, the template engine was changed to an HTML/CSS based system. To render printable PDF files, PDFreactor was integrated with the solution as HTML-to-PDF renderer.

The drag and drop functions were realized by integrating a jQuery UI in the Pimcore backend to easily provide these functions by the use of libraries which were already available.

For the customers, the frontend of the already existing site was extended to provide a new interface for customizing the flyers and posters.

Trigano optimizes the creation of its catalogs with Pimcore

The JAF Group is the largest timber merchant in Europe and sells 83.000 products at 58 sites in 19 countries all over the continent. The current turnover of the JAF Group is 450M USD. Over the course of six decades, it has become central Europe’s leading wholesaler for wood and wooden materials.
CMS, PIM, eCommerce, DAM, Wholesale Distribution

Faster Time to Market and Better Product Management With Pimcore

Set up in 2007, Ekosport is the European specialist and frontrunner for online sales of equipment and gear for snow sliding and outdoor activities. Ekosport in figures is 300.000 products and warehouses covering 10.000 m2, operating in 11 countries in Europe.
PIM, Wholesale Distribution